As a result of shifting to multi-well pad drilling, a large Canadian oil and gas producer began to see a dramatic increase in water consumption from longer drills and larger fracs. Because the water was being hauled to frac sites by tank trucks, the cost to transport more water increased in direct proportion with the larger number of water delivery trips made. At the same time, the local provincial government increased the environmental regulatory requirements aimed at reducing fresh water consumption. To manage costs and remain compliant with regulations, the company decided to build a water hub system to transport water from massive retention ponds. They also wanted a pipeline technology capable of being used for a dual application: delivering highly corrosive produced fracing water initially and produced natural gas at a later time. Because of the corrosive fluids the pipeline would convey, the company also wanted to mitigate the costs associated with pipeline maintenance programs.

FlexSteel efficiently installed more than 5.93 miles (9.54 km) of pipe with a small crew. This enabled the water hub system to be put into service quickly, which was essential to the success of the project. The oil and gas producer concluded that FlexSteel was faster to install than lined steel pipe and much more cost effective. As a direct result of this project, the producer decided to install an additional 5.5+ mi (8.8+ km) of FlexSteel 8-inch line pipe to further increase flow capacity. 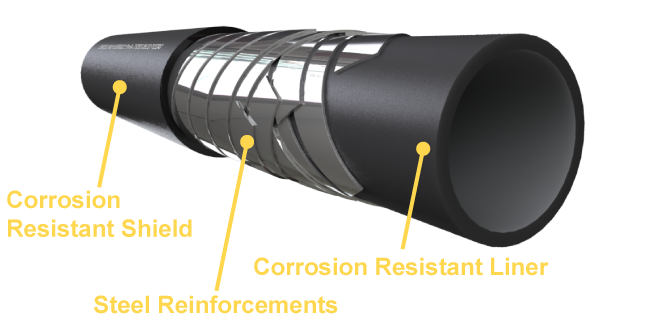